Playing » Beast Battle Lights On / Off 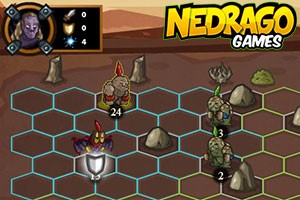 Beast Battle is an Strategy Turn Base game, based on the PC classic “Heroes of Might and Magic”, now in to Flash.
Play with your troops in several battles unlocking new units and upgrading the one you already have.
Choose your hero and play as a warrior or as a magician.
Start with just a few units, and make a whole army using your strategy skills, collecting gold and defeating the enemy.